The changes mentioned last week have been finalised, and a new version of Rocklogger posted to the Android Market. This update allows you to log from any orientation, rather than using strictly the pitch of the phone. Specifically, Rocklogger calculates the steepest angle for the dip angle, and uses the direction of that angle to calculate the new dip direction/strike. This is also shown graphically by a new symbol on the logging screen (pictured). 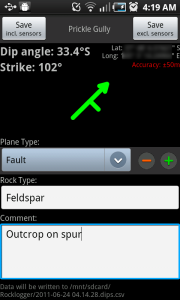 When taking a lineation, it is necessary to measure the dip of one specific axis, rather than the steepest angle. Thus, we have kept the old mode in the new version. To switch, just change plane types. By default, lineations and plunges use the old mode, now known as axial orientation. The rest use the new mode, known as Normal orientation. You can also specify which orientation you want when adding your own planes (paid only).
When logging in axial orientation, the symbol doesn’t rotate, it simply indicates which direction the phone is dipping (vertical line) and the strike (arrow).

Update:
There was a small error when logging perfectly horizontally in dip & strike mode, which has now been updated in v1.31.
Support has been added to devices whose default orientation is landscape (eg tablets, Droid2 Global), so that they now display and record in the correct orientation.
Finally, the orientation sensor calibration has changed, and so all existing calibration data will be erased on upgrade.

If you have any feedback on the new version, please leave a comment below!  (Comments are now turned on)
Advertisement

This entry was posted in Uncategorized. Bookmark the permalink.